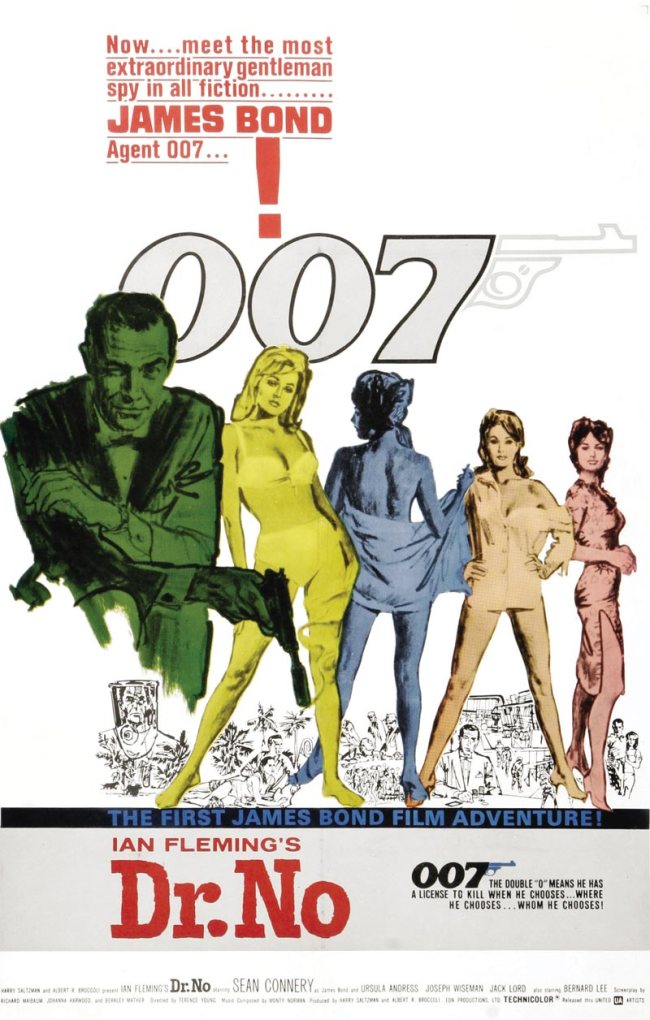 The Villain: Dr. No

The Plan: The disruption of the US Space Program.

The Gadget/Car: Nothing too major here aside from a Geiger counter. The Walther PPK first shows up here.

The Song: None. The James Bond theme.

Released in 1962, Dr. No is our favorite super spy’s first official outing and it’s easily one of the best ones. it’s a film shrouded in mystery, has a super-secret bad guy lair, three “blind” assassins, and a fire-breathing dragon! Wait, what?

Almost immediately in this film we’re introduced to a number of trademarks that’ll stick throughout most of the films. We get the famous gun barrel intro (although no pre-credit sequence just yet,) James Bond’s incredible luck and ability, and his penchant for alcohol, women, and his Walther PPK.  There aren’t any super fancy gadgets or cars but there is a quartermaster of sorts although it isn’t the Q we all know and love. The usually globe-trotting Bond remains in the Jamaica area for the duration of his mission and finally, we’re  introduced to recurring ally, friend, and the ever changing in age, CIA agent Felix Leiter.

More importantly though we’re introduced to the organization SPECTRE, which is an acronym for Special Executive for Counter-Intelligence, Terrorism, and Revenge. I know, right? It’s so perfectly cheesy and I love it. They’re responsible for a number of dangers that James Bond will have to face in his later missions.

The film provides a lot of great tension. The tarantula scene is particularly tense and Bond’s escape from his prison cell on Dr. No’s island is great. Really the entire last act of the film spent on the island is great. Full of real danger and the lack of control that Bond has makes you wonder how he’ll escape this island packed full of deadly radioactivity and an army of guards. Speaking of, one of the interesting things about Dr. No is the eponymous doctor doesn’t show up in person until nearly the end of the film. His character is easily one of the best parts of the film and although he’s only on screen for a short amount of time, he makes an impression and remains one of my favorite Bond villains. He has the ridiculous handicap (yet another trademark) of having metallic hands that have incredible strength, but lack normal dexterity.

The Bond girls are great here and a few of them are working for the enemy. The main (although not the first) Bond girl is Honey Ryder. She too appears late in the film, famously emerging from the ocean in a scene many movies parody or pay homage to. She’s beautiful and Bond, in his typical fashion, wastes no time letting her know what he thinks. I’m still not too sure who she is, but the film makes her out to be just someone who sells seashells. (No info given if this is by the seashore.) She’s often considered to be the Bond girl and while she is one of my favorites, I disagree.

Some might be turned off to this film by the pacing. There isn’t a ton of action in it and the final “boss fight” if you will isn’t much of a fight. A lot of the later films and especially the newer ones became very action-oriented and while I do love a good tank chase through the busy streets of St. Petersburg or tearing apart a train with a construction vehicle, Dr. No is purely an espionage film and it’s a fantastic and highly entertaining one. It doesn’t need all of the explosions (although it does have them,) elaborate car chases, and incredibly strong henchmen to be a great Bond film. Dr. No instead entertains you by drawing you in to the characters, the tension, and the locale.

The only thing I didn’t like about this film, is the lack of the trademarked opening hook and Bond song title sequence. You know, the brief action sequence and theme sung by Whospopularnow to get you pumped and excited for the ride? But like I mentioned, it’s the first film and not all of the trademarks are set in place. I suppose it’s not so much that I didn’t like that there wasn’t one, but more so that I’m so used to it being there that it left me wanting one.

In conclusion, Dr. No is a fantastic entry and definitely one of the more re watchable ones. It welcomes us into the world of James Bond and gives us a good taste of what’s to come. It has a great villain, a great group of Bond girls, a beautiful location, suspense, daring escapes, and silly henchmen…all that’s missing is the car.

Justin Davis will return…to review: From Russia With Love!