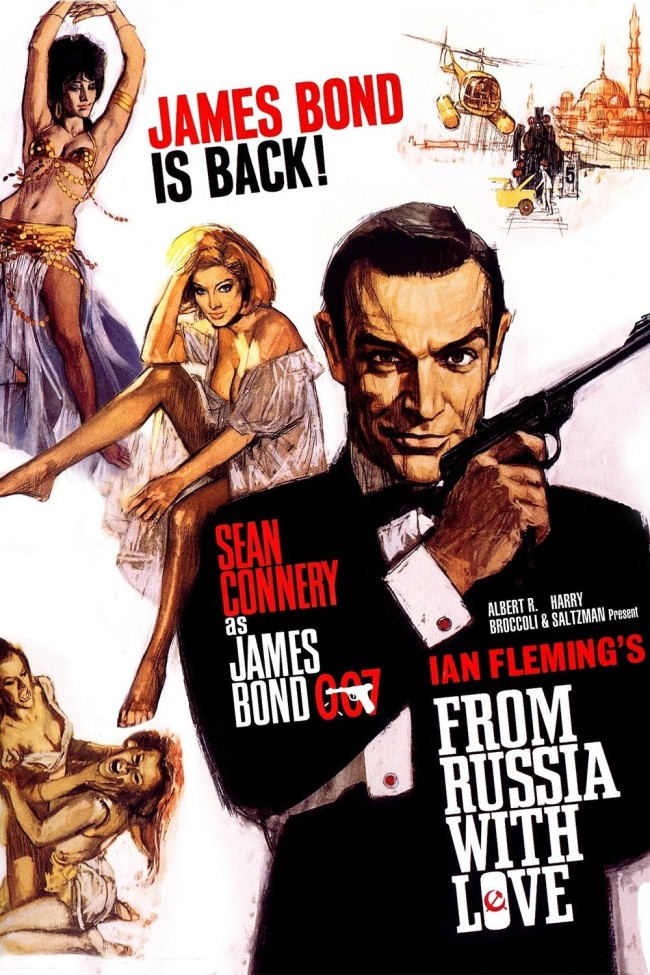 “Red wine with fish. Well, that should have told me something.”

The Plan: Get revenge for the death of Dr. No by developing a ruse to lure 007 into a false mission.

The Gadget/Car: A briefcase that will deploy a gas bomb if opened improperly, a bug detector, and I guess a pager? Remember those? Who, besides doctors still uses them?

The Song: “From Russia With Love” by Matt Monro. (instead played during the film and over the credits)

Next up we have 1963’s From Russia With Love. Following Dr. No we are given a film that is slightly different than its predecessor and has a formula more like the rest of the films. This time we get the leader of SPECTRE, poisoned-tipped shoe spikes, and a plan to kill James Bond.

James Bond is back! We begin with the gun barrel intro and are then thrust into…the first opening hook! While it’s not terribly action-packed as the later ones, it’s definitely one that sets the tone for the rest of the film. In it we’re introduced to the first real henchman James Bond will have to tackle: extremely efficient and imposing Red Grant! He serves as a great baddie and is one of my favorites. This movie marks the introduction of two more important characters in the James Bond universe: Q, who despite being continually annoyed with him, will provide Bond with a mission-convenient gadget (that Bond will not return in proper working order) and the head of SPECTRE, Number 1 aka Ernst Blofeld who appears from the neck down with his kitty cat. He’s cute, that cat. I kind of want one. I’ll have to talk to the wife though.

But who is Blofeld? Well, turns out, SPECTRE is not particularly happy that James Bond killed Dr. No, so they develop a ruse in order to lure 007 into a trap and not just kill him, but absolutely humiliate him. It all involves a Lektor decoding device, a beautiful Russian woman named Tatiana Romanova, and very careful planning.

Again, we’re met with a film that provides a lot of tension…a lot of it helped along by Red Grant…it should be noted that it only took me three or four views to figure out that he was played by Robert Shaw from Jaws. No, not the Bond henchman, I mean the movie with the shark. There’s a good couple of scenes where Grant and Bond know who each other are but have to wait to duke it out. There’s plenty of deception, secret meet ups, multiple locations, and false identities run rampant in this here picture. In a change from Dr. No, there’s more action including an elaborate shoot out in a gypsy settlement, bombs going off, boat chases, and an all out brawl between Bond and Grant.

Delivering such things as an imposing henchman, a helicopter chase, beautiful locations, and a great ending, From Russia With Love is one of the greats. It only has one little problem: I’m still waiting on that super-duper-gadget car…maybe in the next one… 😉

4 thoughts on “Reviews…James Bond Reviews: From Russia With Love”